Amateur ham radio aficionados are picking up a new transmission from Disco Communication Tower Beta 32, which has been attributed to the popular klezmer group Duck Sauce. After their initial peace offering “Smiley Face” was received to widespread adoration from man and fowl alike, the duo of Tae Kwon Do champion Armand Van Helden and infomercial pioneer A-Trak have shared a new digitized scroll: “Get To Steppin.”
The Ducks have been warming up their beaks in preparation for live kazoo performances. Their heavily anticipated Coachella levitation session will be followed by a San Francisco gathering of the disco illuminati, May 9 at the Midway, alongside bewinged brethren Chromeo, Yung Bae, The Magician, Nancy Whang, Biscits and DJ Dials.
An unconfirmed source, which may or may not stem from a fortune cookie note, has hinted that 2020 will bring even more musical numbers from the reclusive waterfowl duo. 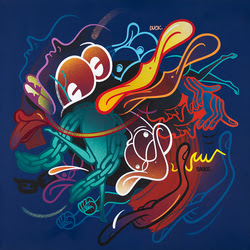