January 14, 2020 (Los Angeles)- After taking a brief moment off in early 2019, rap legend Redman is starting 2020 off with a new video that will blow your mind! He recently released his new music video “Slap Da Shit Oucha” off of his brand new 3 Joints EP. The video features Redman going on a slapping spree through the streets, nailing everyone he finds in this hilarious narrative. Redman leaves no bystanders un-slapped, as the video descends into an all-out rampage of eccentric smacking. 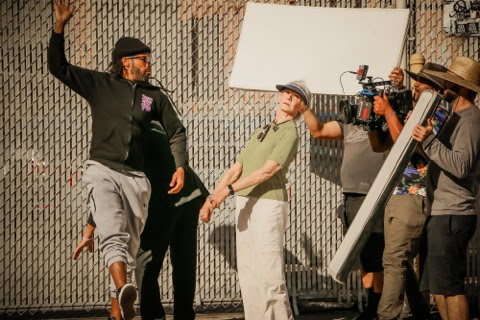 “Slap Da Shit Oucha” is aggressively humorous in its own right, with other artists such as Linkin Park’s Mike Shinoda noting its comical hook. The song is accompanied by “Its a Banguh” and “Zugga” on Redman’s newest EP, all of which capture Redman’s solo energy. 3 Joints is a collaboration with Riveting Music (a subdivision of Riveting Entertainment), who has partnered with Gilla House in the past on projects like “YA!”, “I Love Hip Hop”, “1990 Now”, and most recently Redman’s wildly impactful “Black Man in America”.

It’s no secret that Redman has always been creative with his music and visuals; “Slap Da Shit Oucha” is no different, with Redman making his return to the director’s chair alongside producer Andrew Listermann with Riveting Entertainment.

“Slap Da Shit Oucha” is available now for download and is streaming on all platforms, along with the entire 3 Joints EP.

RIVETING ENTERTAINMENT is a multi-award-winning content house and music label with a roster of top level directors. Founded in 2008 by its CEO Andrew Listermann, the company is headquartered in Los Angeles and boasts a client list that includes the likes of Lady Gaga, Justin Bieber, DJ Khaled, Chris Brown, Redman, Backstreet Boys, Diddy, Mary J Blige, Post Malone, G-Eazy, Nicki Minaj, Tyga and many more. In 2017, Riveting released two feature film documentaries, “Chris Brown: Welcome To My Life” and “Mary J Blige: Strength of a Woman” and followed that up with their first feature film “Never Heard” in 2018, currently available on NETFLIX. RIVETING produced content has more than 50 billion views online.